The story of Lynx began in 1968 in Kurikka, Finland. The first sketches of a new kind of snowmobile were made and the first sleds were manufactured. Little did they know that a new icon was born.

It was the year 1968. The Finnish snowmobile distributor had been shown a  snowmobile prototype. He was doubtful, to put it mildly. But the R&D team was determined to prove the nay-sayers wrong. The goal was to make everything as durable as possible. As a matter of honor, the quality was everything for the developers.

The first AS 50 prototype was tested at a bog during the summer. The conditions were actually pretty close to snow, if you didn’t mind the occasional swim. The goal was to ride the snowmobile for 2 months. If the prototype endured it, it would be passable to sell in the autumn.

”Lynx is domestic and developed for Finland's capricious winter”. This was the way the Lynx line-up 1970 was introduced in the Finnish brochure.

Lynx AS 50 was the industry-first snowmobile with a 500 mm wide track. The production of the model started with a batch of 50 units, all sold in Finland, in 1968. Next year the first line-up with the models L-20, L-30 and L-40 was released and exporting to Sweden and Norway started.

From the very beginning, Lynx became known for its innovativeness. The Lynx 40 J, released in 1970, was the first snowmobile with articulated rear suspension, improving deep snow capability. To improve utility usage, Lynx introduced the first two-speed transmission with reverse in a single track snowmobile in 1972.

One of the earliest models, Lynx 400, presented in the commercial photo in early 70s. Utility usage was strongly present at that time.

In the early years, the most important customers were reindeer herders in Lapland and farmers in southern Finland. Models like Lynx 535 and 635 can nowadays still be spotted in regular use. That's a sign of trustworthiness and timeless design.

Early 1980s was to be revolutionary for Lynx. Experiments on race tracks led to European snowmobile history. Also, the legendary GLX 5900 wide-track model set the direction for the whole industry.

By late 1970s, Lynx was already well known for their trustworthy workhorses – the utility snowmobiles. But something else was already brewing: motocross rider Pauli Piippola had shown interest in riding snowcross with a Lynx. Piippola and fellow snowcross enthusiasts Esa Kolppanen, Juhani Tapio, and Erik Ahmasalo started experimenting on their own time, using a narrow-tracked utility sled as a base. They knew other sleds’ strengths, and had a clear vision of the perfect snowcross snowmobile. The work was so inspiring, that they hardly had days off - nor minded about the salary. The very first test ride around the Lynx factory showed that what they had built was indeed a very fine vehicle. So fine that in 1983, Piippola won the first race they attended. That was the first of countless Lynx race wins.

Watch here the documentary film The Heroes of Lynx – 30 Years of Race Domination: 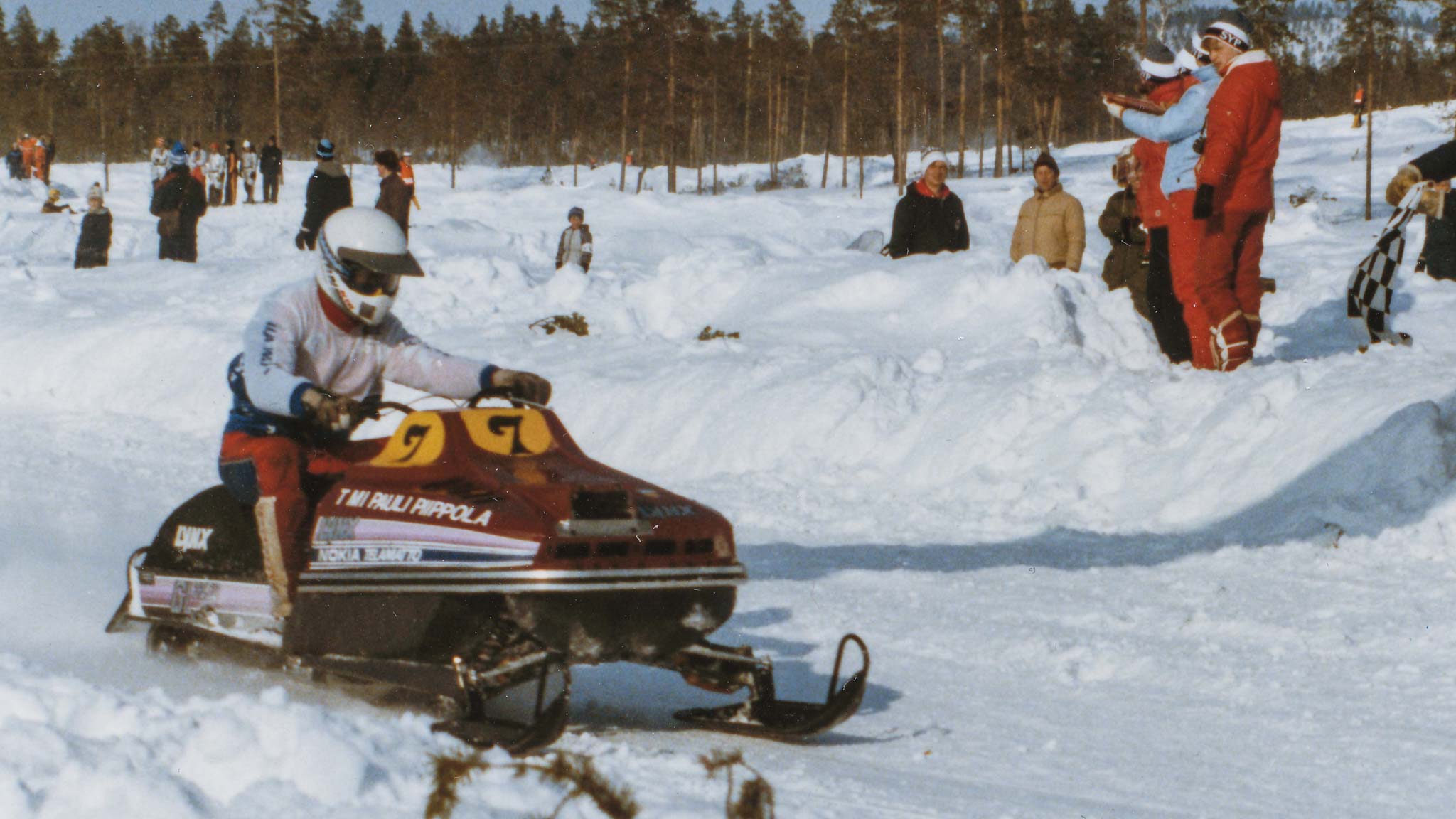 Lynx GLX 5900 was a revolutionary model for the industry. It was the first wide-track model that combined the best properties of recreational and utility snowmobiles.

But more was to come. The GLX Finlandia got alongside the long track version GLX 5900 in 1983. Combining the best properties of utility and recreational snowmobiles, GLX 5900 was a true game changer in the industry, being the first crossover model long before anyone talked about crossovers. Featuring a modern skid frame suspension, a long and wide track and at the time very powerful, fan cooled Rotax 503 engine, the “Fiftynine” became an immediate success all over Scandinavia by impressing the users with its great rideability and versatility. GLX 5900 set the standard for a modern wide track snowmobile. The legend was born.

For model year 1985, Lynx introduced its first trail sport snowmobile. The GLS 3300 became an iconic model of its time and was an ancestor for all later Lynx trail sport models.

The GLS 3300 was based on a race sled and was introduced for model year 1985. Featuring the Rotax 503 engine, the GLS was not the most powerful snowmobile on the market. However, the complete package, in terms of riding quality and performance, made it unbeatable. The GLS 3300 had an independent front suspension and great balance with early signs of rider forward ergonomics. The era of Lynx trail sport snowmobiles had begun.

The GLS 3300 was not the most powerful machine at the time but its good balance, modern rider’s ergonomics and great performance all over, made it unbeatable. The GLS 3300 is one of the most coveted models among Lynx enthusiasts.

Lynx innovations continued as the Syncro transmission that was introduced in 1988. The transmission that allowed shifting the gear while riding low speed, was epoch-making in utility use. Alongside wide-track utility models, the Syncro was used in narrow track utility snowmobiles, which is still an important branch in the Lynx family tree. Models like GL 3900, GL 250 and GL 360 achieved great reputation among reindeer herders and other professional users before Forest Fox, one of the longest-lived models in the history of Lynx, which was released in 1995. Ranger and Ranger King models brought a more recreational and touring approach to the segment in the early 90s. 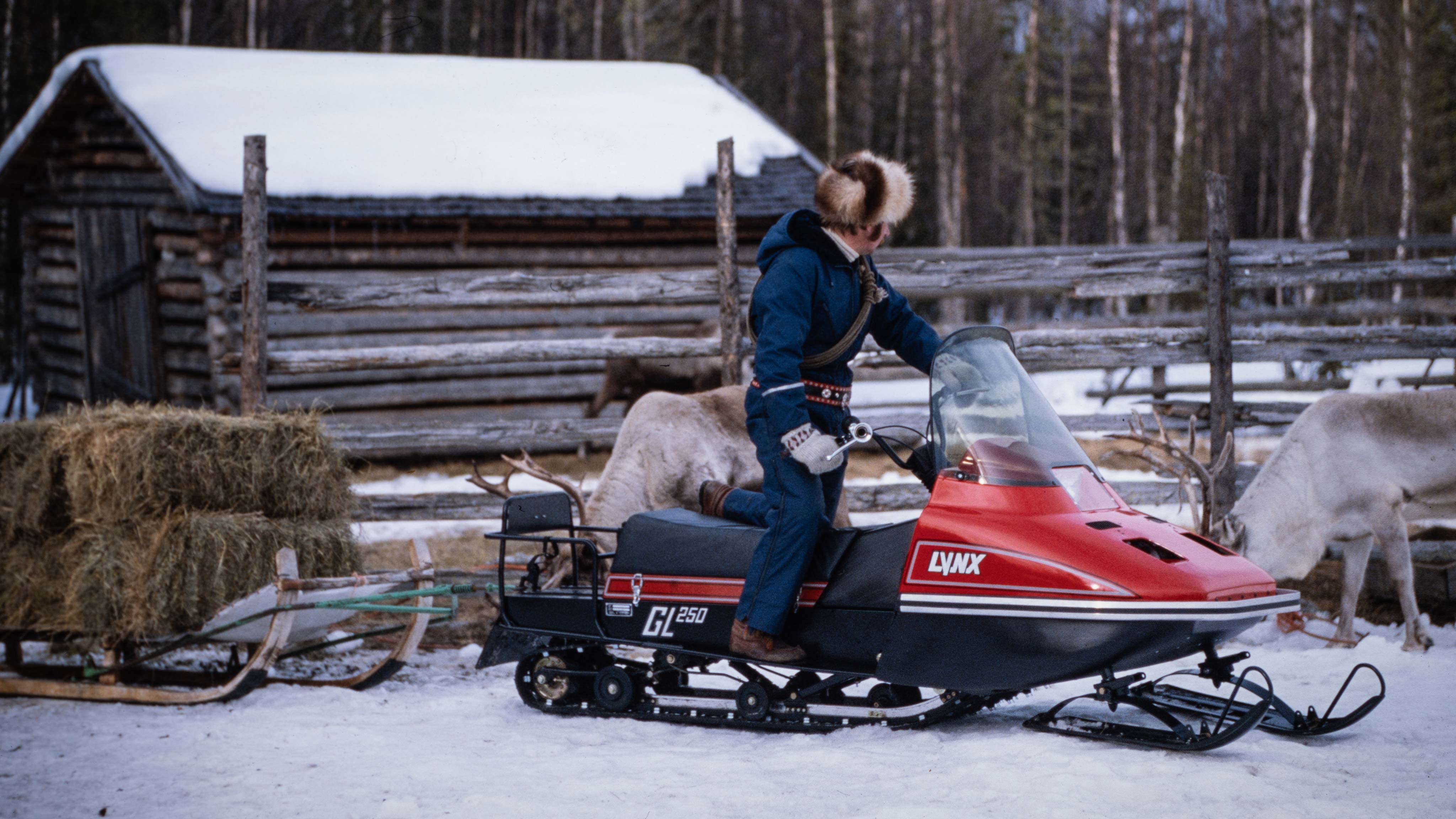 The 1990s was the decade of the Lynx line-up expansion. Model name Lynx Rave was introduced the very first time for model year 1990 with the GLS 3800 model. When entering the Cobra platform, the power of Rave models was boosted by the Rotax 643 and later Rotax 670 engines. With the Cobra platform, introduced for model year 1992, Lynx offered more recreational and performance models than ever before. Icons like Cobra Enduro and Cobra Racing were successful both in sales numbers and races. Cobra Touring and Grand Touring models offered luxurious comfort and performance in the golden era of 2-up touring snowmobiles.

In early 90s Lynx expanded its line-up by offering more models than ever for recreational use. The Cobra Racing 1994 was a special made snowmobile for cross-country races and for aggressive trail riding.

The new millennium started the era of modern rider ergonomics and accelerated innovation. People began to find more freedom off trails and Lynx made its first carves in freeriding.

Lynx celebrated its 30-year milestone in 1998 and the year before a new G-Type platform was introduced. The G-Type was known for its unique vertical LVS front suspension and revolutionary looks. Following the Cobra and G-Type platform, Lynx EVO trail sport models were introduced for model year 2001. EVO models Rave, Enduro and Racing were known for their stunning handling and riding quality.

In the model year 1999, Lynx Enduro 500 Special and the Rave Big Pipe X represented the trail sport snowmobiles in the era of the G-Type platform.

Model year 2005 was a significant step in the development of rider ergonomics and weight distribution when the R-EVO platform was introduced in Rave and Enduro trail sport models. The debut year of the new platform wasn’t a huge success: the sleds were erratic and quite heavy to ride, they had some technical issues and conservative outlooks didn’t satisfy the customers either. Homeworks were done for the model year 2006. 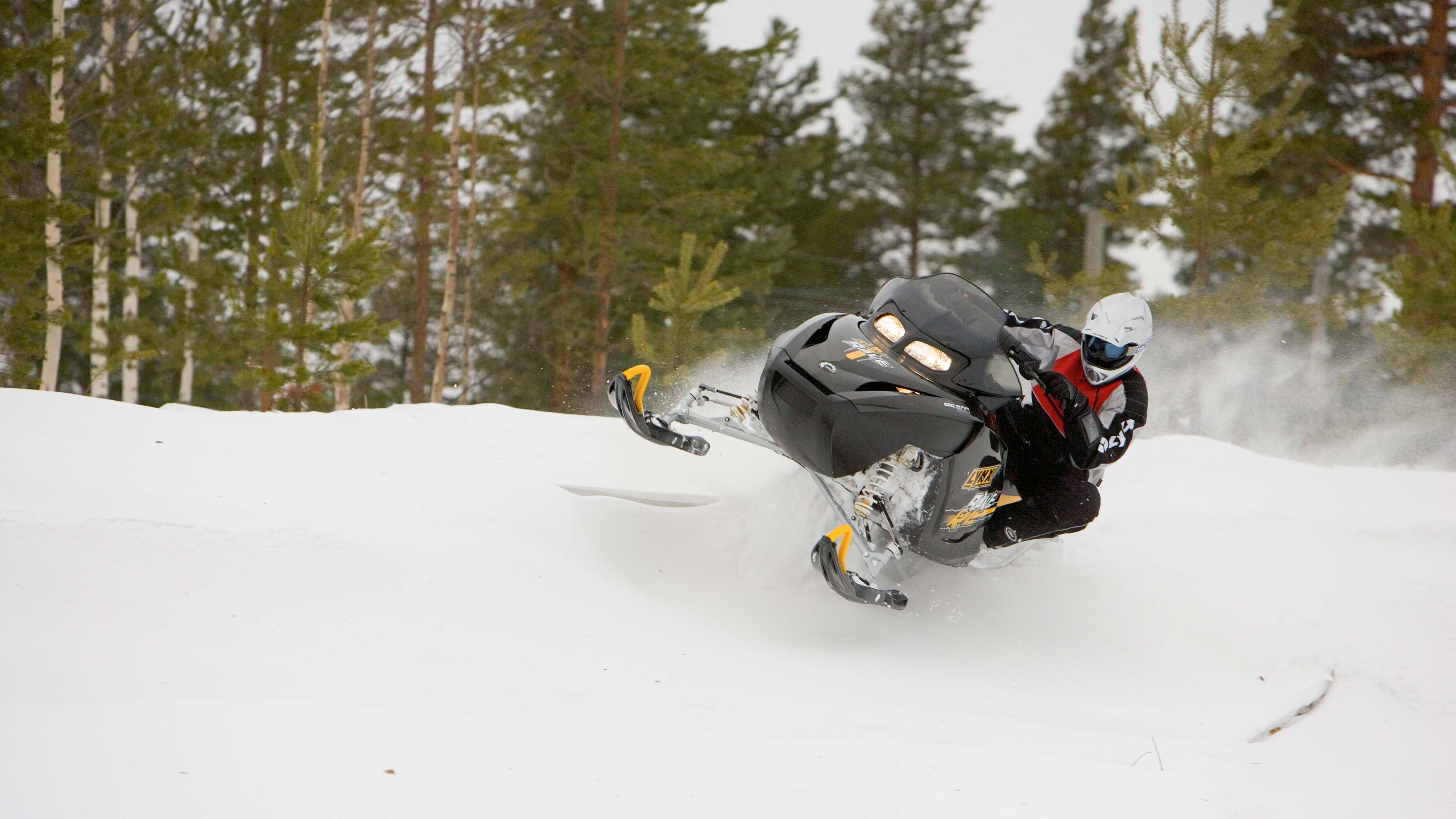 For the model year 2006 Lynx R-EVO platform was renewed with bevelled tunnel and improved suspension setup. Rave RC 800 PowerTek was the top of the line trail sport model then. With the improvements R-EVO was reborn after its debut year, when the model didn’t respond to expectations yet.

Insightful and ambitious professionals and snowmobile enthusiasts have helped Lynx grow during the years. Just as Juhani Tapio played an integral part in developing the first Lynx sports sled, his son Janne Tapio joined the R&D team in 2005. As a snowcross champion he knew what it took to win in races. Rave RE 600 was launched for model year 2007. The race ready model, featuring the PPS rear suspension, was a legendary milestone for sports snowmobiles in Scandinavia.

2009 was a big model year for Lynx. The REX platform was introduced and the Lynx Commander was born.

Having celebrated the 50th anniversary, Lynx is still loyal to its tradition of keeping the user in the focus. As in the early days, the matter of honor is to make purpose-built snowmobiles for Lynx riders to enable unforgettable experiences in nature.

The spirit of the legendary GLX 5900 was strongly present when the Lynx team launched a whole new age of wide-track crossover snowmobiles for model year 2009. Lynx Commander raised the riding qualities of wide-track utility snowmobiles to the next level. It was powerful and sporty, yet staying true to its workhorse roots. Appealing to a wide range of snowmobilers, Commander models have been the top sellers in the European snowmobile market ever since.

Lynx Xtrim Commander did the same in 2009 that the GLX 5900 did 26 years earlier. Like the GLX, the Commander redefined the concept of wide-track snowmobile. The Commander was immediate success and became the most wanted snowmobile model in Europe.

2009 was also the year, when Lynx sport models got a new REX platform. Then Rotax 600 E-TEC represented the latest engine technology. Two years later, the Xtrim BoonDocker model was introduced, powered by the 800R version of E-TEC engine. At the time, the BoonDocker was more of a freeride snowmobile with a sporty approach, rather than a refined deep snow machine.

In model year 2018 Lynx celebrated its 50th anniversary by releasing the Radien platform. With the short tunnel in BoonDocker DS deep snow model, once again Lynx was the manufacturer that brought an innovation to the market that was established on competitors’ products later.

2021 turned a new page in snowmobile history, when Lynx snowmobiles became available for the first time in the North American market.

2021 was the year of the long awaited arrival to North America, bringing the Lynx riding experience to hardcore riders in Canada and the US. Even on the new continent we continue our journey faithful to our roots and our true Finnish soul.

From shredding the deep snow to herding reindeer, the Lynx sleds are used wherever there’s need for a purpose-built rugged snowmobile, worthy of nature’s toughest trails. Lynx snowmobiles have always been developed and ridden by riders who expect more. More from their sled, and more from themselves.